Comic Update: Introducing Andre Davis – Superhero from the South Side of Chicago? 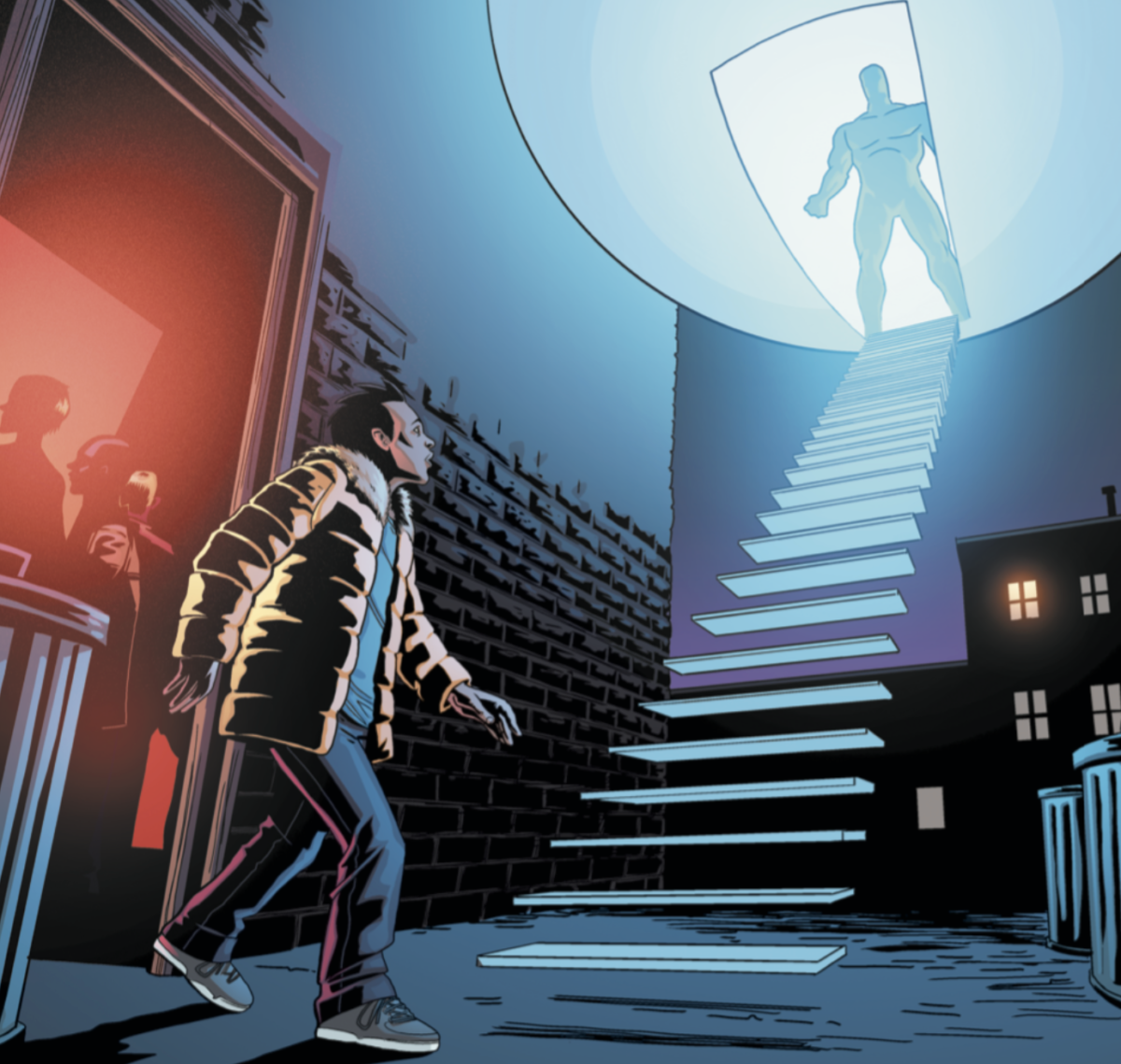 Background – A Boy With Big Ideas

All of our initial stories and characters in Back of the Yards aren’t really entirely ours. We are but humble stewards to the exciting new narrative avenues Jimmy Briseno discovered while facilitating the Made Collaborative After School Arts Program with real urban youth in Chicago.

Indeed, this entire project can be traced to a single, intrepid utterance by a young man whom we call “Andre.” It was a declaration that emboldened us all:

Andre’s audacity, creativity and charm crystalized the vision we have for this whole enterprise. So, it is absolutely fitting that the character he inspired should step forward into a leading role for this first chapter of Back of the Yards: “Just Dreamin’.”

The premise of Andre’s story is that Andre himself, as the main character, obtains “god-like” powers through a supernatural encounter in his Chicago neighborhood.

As originally described, the story begins with Andre and a friend walking to a house party of a known high school acquaintance. At the party, Andre sees some familiar faces and also some new ones. He meets Charmayne for the first time. The two banter as they get to know one another. Charmayne—one-half of a precocious pair of twins—challenges Andre’s rebellious and self-assured manner.

That is, until he hears some commotion outside.

Tamia is at the very same party. The party serves as the backdrop for an important point in her narrative, as well. Has she been betrayed? She’s been hearing rumors and fearing the worst. So, she confronts her boyfriend, Wilson, the young man with whom she’d spent one magical summer.

The bracing winds of autumn, however, have a way of revealing difficult truths. The young lovers argue. Wailing and in tears, Tamia dashes from the adolescent revelry.

A high-pitched whistle, or a siren, rings throughout the party. It’s so loud it’s painful! But only Andre can hear it.

Andre reels, bidding an abrupt farewell to Charmayne. He stumbles to the alley behind the house, the apparent source of the piercing tone. This is where the story takes an interesting turn—both in Andre’s tale and in the story of how the Made Collaborative project came to be.

While “Andre,” our participating youth, described his fantastic alleyway vision to Jimmy, the cinematic sweep of all the kids’ narratives took shape in Jimmy’s mind. There was potential here. It was palpable. These were all creative, fun and sometimes personal teenage stories, to be sure. But, to Jimmy, there seemed to be more to them than only that. As in dreams, the familiar sights and sounds of everyday life can also indicate hidden features of the collective unconscious.

Jimmy felt his suspense heighten as the youth continued his chronicle…

The Translucent Staircase to the Secret Chiefs

The alarming sound fades as Andre steps into the alley. He raises his eyes to the soft, pallid glow of what he assumes to be the full moon. Appearing in the middle of the alley, a flight of golden, translucent stairs lead towards the sky, beckoning Andre to ascend.

Ascend he does, where he finds himself in the smooth interior of a higher dimensional craft. He is greeted by a giant—one of the mysterious Secret Chiefs—who immediately speaks words of comfort and reassurance.

“Welcome, Andre. Please, don’t be alarmed. We’ve been expecting you.”

Having heard the otherworldly call to adventure, and answered, Andre can now worthily receive his revelation. The strange visitor explains that he has the power to make his dreams real. It is a power which, for now, distinguishes Andre from the other characters in Back of the Yards.

Aloft in the moon-shaped craft, Andre observes others’ dreams, as well, like the video-game combat of Russell and Draymond. As their ninja alter egos, Teshue and Shiro, their sparring is cut short when they are attacked by a gang of bullies.

Andre feels compelled to intercede. Once again answering the hero’s call, he emerges from the dream craft as a heightened version of himself—a true superhero like the kind he draws in his sketchbooks. If not yet a god, Andre is now far more than mere mortal. Using his enhanced physical abilities, he easily beats back the bullies.

We follow Andre’s journey as he comes to terms with his newly obtained powers, and begins to contemplate how he will use those powers as a teen still living in his inner-city neighborhood.