Comic Update: Introducing Back of the Yards! Our Inaugural Comic Series 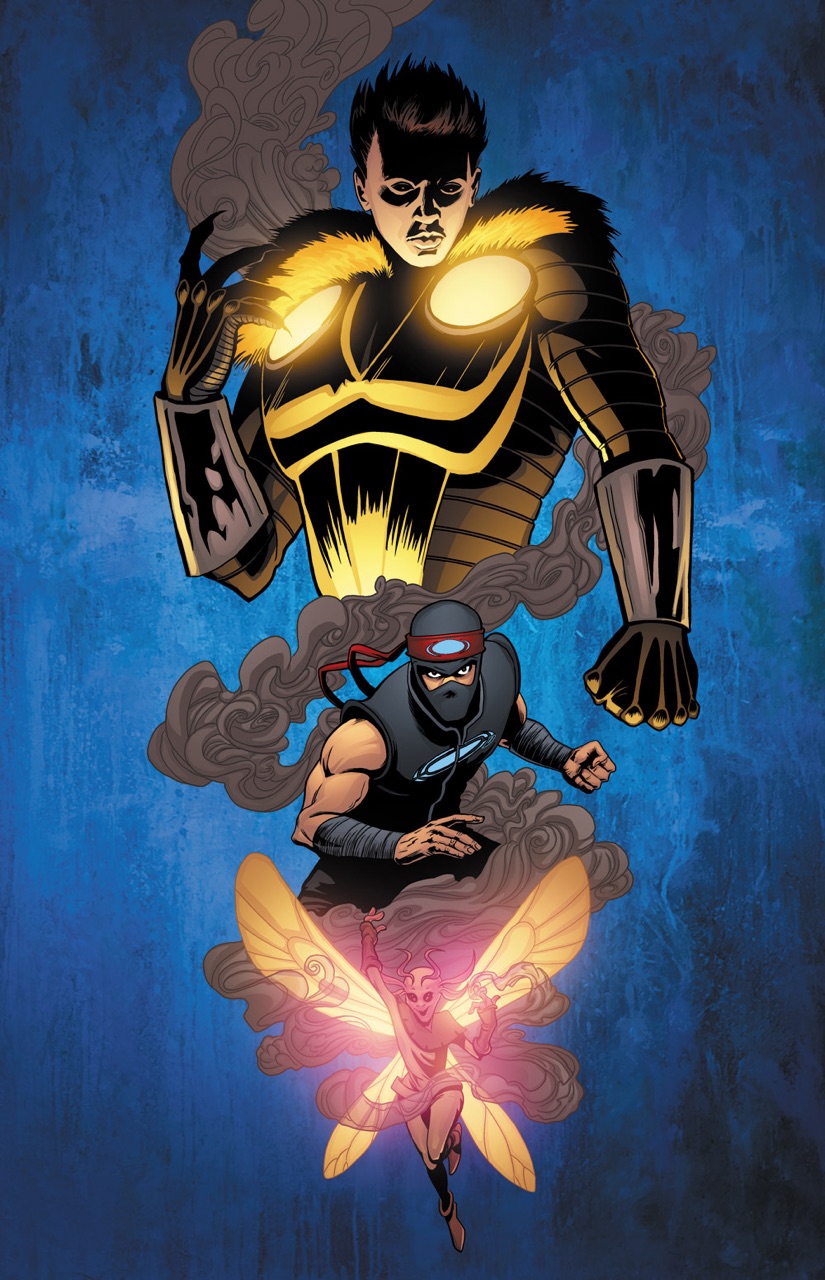 Introducing Back of the Yards!  Our Inaugural Comic Series

What if your dreams became real?

It doesn’t get more real than Back of the Yards, on the South Side of Chicago, when you’re growing up as a teen. It’s where fantasy and the power of story can build resilience, foster healing and lead to greater understanding. Based on the stories and experiences of real urban youth, Made Collaborative and the Made Collaborative Scholarship Fund present Back of the Yards, a story of gritty truth that’s beyond your wildest dreams.

A fictionalized version of the real Back of the Yards neighborhood serves as setting for the eponymous comic book series. Likewise, the stories and the characters themselves are based on the real lives and musings of Chicago youth. These stories were first conceived by students attending an after school arts program. They were collected by our main man, Jimmy Briseno, during Made Collaborative’s first round of urban outreach to inner-city schools. Jimmy had the bright idea to elevate these kids’ ideas in a way that few had contemplated before. By bringing professional comics artists and writers into the creative process, Jimmy hoped to validate the kids’ stories and experiences by weaving them together as the narrative threads of a real comic book series.

The result is a collaborative effort between artists and youth. It is the stuff of Back of the Yards’ first story arc: “Just Dreamin’.” But how, exactly, do kids’ ideas become comics pages? Read on.

The magic of creativity begins with inspiration but it can only be sustained by unwavering dedication and tireless grinding. Project founder, Jimmy Briseno, has since recruited others to grind with him on the Made Collaborative journey (and we’re so glad he did!) but the journey began with him, all by himself, in front of a room full of kids all waiting for what he was going to say next.

It took a little coaxing, at first, to get things started, but once the kids caught the storytelling bug they were off and running. It only made sense to bring a small team of artists into the collaborative process to add greater depth and legitimacy to all that Jimmy had documented from his afterschool creative sessions with the youth.

Together—Jimmy, the artists and the youth—had refined and expanded upon a number of narrative threads. All of them fresh, original ideas from the kids, based on their lives and heightened by their favorite pop culture. Jimmy and his collaborators had compiled a “series bible,” of sorts, with model sheets, storyboards, descriptions of plot and characters. There were even some preliminary scripts that Jimmy had worked out with the youth.

The first round of collaborations had produced a wide variety of narrative content. Which was wonderful. That’s exactly what the kids had been encouraged to do: tell whatever story they felt was worth telling. But it also presented a challenge in bringing all the disparate elements together into a harmonious whole. That was the challenge presented to the comics production team seeking to make “Just Dreamin’” very much a reality.

An anthology of disconnected storylines would have been easier, but not nearly as engaging. We, on the comics production team, were inspired. We were inspired by the kids’ authentic, original stories and driven to produce something worthy of their courage. Because it takes courage to nurture the creative impulse and make something new in Chicago’s harsh urban environment. We wanted to reach a little higher.

We’d frame the Back of the Yards series in a context that mimics the one in which it was created! (Are you still with me?) In other words, the teenaged characters in kids’ stories would all go to the same school. And they would all be familiar with each other, too, because they are all part of the same afterschool arts program led by the same mysterious facilitator.

Mr. Castaneda became a linchpin for the series. He is the connective tissue that holds all the disparate narrative structures of Back of the Yards together.

Presenting the comic book this way created two opportunities for the production team. First, it allowed us to incorporate elements of Made Collaborative’s amazing genesis into the comic itself. Because, as fascinating as the kids’ stories are, just as appealing is the story behind the story. That is, the story of the kids who created the stories.

On a deeper level, structuring Back of the Yards in this way forced the production team to search for the common themes influencing all the kids’ stories. They were by no means obvious. The stories ranged from heart-wrenchingly real to mind-blowingly fantastic. But the search, indeed, bore fruit, and it led us a journey starting on the Southside of Chicago and taking us to places beyond space and time.

So, how does a story of young love and betrayal connect to a story of secret chiefs from a higher dimension? How do the video game fantasies of two young cousins play into it? And how is the magic of creativity and storytelling somehow responsible?

Andre is based on an intelligent and charismatic boy from Phase One of Made Collaborative’s youth outreach. He takes the lead role in our initial story arc. Like the Chicago youth who inspired him, he is a curious and creative character, inclined to question, rather than take things at face value.

Andre finds himself the recipient of mysterious superpowers as a result of an amazing encounter with one of the inscrutable secret chiefs of all space and time. He learns that he has a certain mastery over the strange world that we all go to when we dream.

“You can make your dreams real,” he is told.

But, does that mastery carry over into the waking world, too? Moreover, what would Andre do with that kind of power?

In the dream dimension, Andre’s formidable intellect is given regal form when his whole essence is enhanced to resemble a lion-themed superhero with heightened powers of strength, agility and perception.

The question posed by the Just Dreamin’ story arc is whether Andre’s superhero adventures are simply an escapist power fantasy or a representation of his highest, truest self.

Tamia’s story is surely relatable, but it’s also based on the true-life experiences reported to us by participating urban youth. And, like many of the kids in our program, Tamia turns to creativity as both an outlet and an escape from her daily struggles. She is an avid artist and journaler. Her perspective gives the story emotional depth and balance.

Tamia is a powerful young woman still in search of her voice. Will she ever realize the heights of her potential or will she continue to be stifled by those who seek to take advantage of her?

In the dream dimension, Tamia’s efforts to find her own voice are personified by a tiny fairy with a siren call that reaches beyond the boundaries of linear time. Her potential is great, but still not fully realized, as the fairy form she inhabits is small, undeveloped and not yet a true agent in her own destiny.

She has a special relationship with Russell, who can summon her for help when both of them are dreaming. The depth and the nature of this creative connection is yet to be explored in the pages of Back of the Yards.

Cousins Russell and Draymond share a fraternal bond that is cemented by the fantastic world they both share. It’s a world inspired by the manga and video games so popular in today’s youth culture. The stories they create make them feel powerful when they are so often made to feel powerless by neighborhood bullies and other stressors.

Many of our Phase One participating youth had similarly intricate imaginary worlds, worlds they would create with others. Made Collaborative has provided a structured outlet for these stories and we’ve developed them into real comic books with the help of professional artists and writers.

In the dream dimension, Russell and Draymond are Teshue and Shiro, powerful ninjas forever locked in mortal combat. They collaborate on an intricate storyline that incorporates both elements of the real world and the dream dimension. Their imagination is powerful, but, unlike Andre’s abilities, their shared narrative is not yet “self-aware” enough to have evolved beyond the potential for escape.

Give them time. They’re still young.

Interestingly, Teshue, Russell’s alter ego, is capable of summoning Tamia’s fairy from for assistance. But the process is difficult for Russell to master. And since the fairy has a developing will of her own, she isn’t always helpful to Russell. At not helpful in ways that are immediately obvious.

And, alas there’s more, so much more.  We haven’t even gotten to the Elders yet!  But you can read all about it here!  Our journey has only just begun!