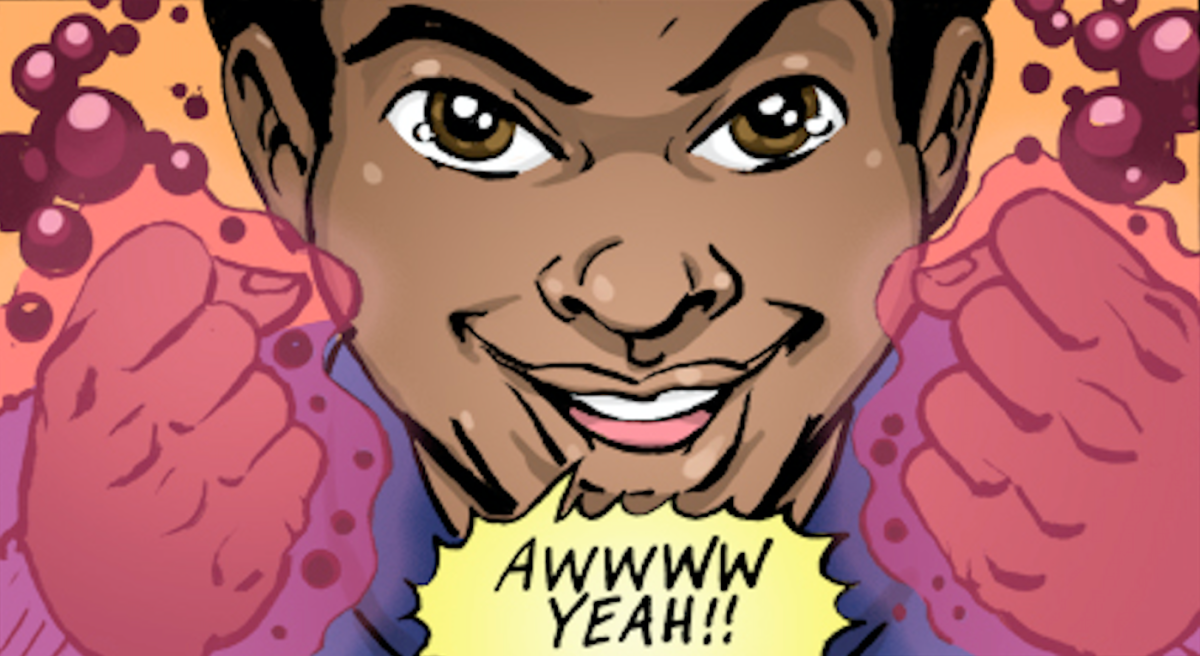 The room looks like so many other high school classrooms with a high table counter extending in front for the teacher to use for various presentations, and corresponding rows of single desks lined up parallel with one another from the front of the room to the back for youth to sit.  I stand in front of the classroom.  With me are a small group of initial participating youth who had been given a prior description of the project.  I can feel their scrutiny as I bring my initial presentation to a close.

The youth remain silent.  I try to further gauge some reaction.  Surely they see right through me.  I mean, I’m no teacher. Hell, I’m barely a lawyer, apart from the degree I somehow fleeced from my law school.  So what am I doing here at this after-school program on the West Side of Chicago, working with these kids to develop comic stories based on their interests and ideas?  I’m not even an artist! They have to know I have no idea what I’m doing. Surely they do.

One of the youth, a stout male named Nehemiah finally raises his hand.

“So, like, these stories can be about anything we want them to be?  I mean, can we just make stuff up or do they have to be true stories? “

“They can be about whatever you want them to be about – made up or based on real experiences.  It’s entirely up to you.”

Another youth, a young African American female named Tamia then raises her hand.

“Can they be about relationships?”

“Yep, relationships.  Friendships. School. Family.  Or they can be completely made up and based on some sort of alternative reality.  Anything you want.”

I look around to see if the other youth seem engaged.  I recall a prior conversation with one of the participating project artists who was also a former teacher, and he advised me that no matter what, fight against silence.  Even if you have to repeat yourself. Fight silence in the room. Any interaction is better than no interaction.

“The only limit is your imagination.”

Good god, did I really just say that?  I promised myself that I would not say that!  Such a lazy cliché. These poor kids.

Yet somehow, despite my ineptitude, I notice one of the youth, a tall angular kid named Russell sitting in the back of the room, appears just on the verge of offering a thought.

And just as suddenly, another youth – an animated young man named Andre sitting in the front row, proclaims boldly, “I’ve got an idea.  I know what story I want to tell.  And it’s going to be great!”

Well holy s@#&, I think to myself.  Look what we have here.  Is that genuine interest I hear?  It can’t be.

The kid is probably setting me up for a joke.  Brace yourself, here it comes.

It is then when Nehemiah quickly responds, “damn, that was like all sudden man – so what’s your idea?  All passionate and stuff.”

Andre, unfazed and smiling coyly, “that’s because it’s a great idea if I do say so myself.”  He then collects himself and proceeds, “alright, so there’s a lot to it, but it all starts with me walking to a party that me and my friends heard about.  You know, just a small house party down a few blocks from my place.  No big deal.  And, we being teens, you know, we’re thinking we’ll just head down there and have a little fun and hang out.”

I listen attentively as Andre’s hand gestures become more animated.  Like me, Andre tends to talk with his hands. I don’t know this kid from Adam, but I already like him.

“So, we go to this party, and it’s cool.  Me and my boys arrive, and we see some people we know, and some we don’t, but everyone is hanging out, and the vibe is cool.”

“And then, out of nowhere we hear this commotion from outside.”

Andre thinks about it for a moment, “I don’t know, something like a ringing bell, maybe.  But it’s definitely something different.  It’s a sound that immediately draws me and two other guys outside to the alley, where the sound is coming from.”

To my surprise, as Andre speaks, I begin to envision what the comic story might look.

“So we go out there, this alley, and we see these stairs – like translucent, glowing stairs – rising up out of nowhere and going up towards the sky.  And me and these two dudes, who I don’t really know, but who were at the party, we are looking at each other in amazement and like, holy #$^%!”

“And I am kind of scared, but at the same time, I see those two guys that came out to the alley with me start going up the stairs, and I immediately follow them.  I am thinking that I’ve GOT to see what is up there at the top of these stairs!”

“So we go up to the top of these stairs, and that’s when we see this god-like figure, he kind of looks like Zeus and he’s got this long staff, and we’re looking at each other, not sure what is happening.  And I am thinking to myself: is this a dream?  But it’s so vivid and real, I am just going out of my mind!”

“And that’s when this god-like figure says he’s going to grant each of us a wish. But we have to make it quickly.  So all of the sudden, I am panicked.  I don’t know what to wish for – so I wait to see if the other dudes will make a wish first.”

“And then almost immediately after, the next dude says, “I want to be a god, too!’”

“And so, without even really thinking – you know, because this all coming at me so fast – I just say the exact same thing: ‘I want to be a god!”

“And bam, the God-like figure then takes his staff and raises it above his head, and light then emanates from the staff on to each us, and bam – WE’RE GODS!”

The Plot Thickens as the Kids Collaborate

Andre goes on to explain his vision for the story emphasizing that it will not only action based, but also about his own internal struggle of dealing with the morality of having so much power and using that sudden power for both good and evil.  All of which would occur in the context of his West-side Chicago neighborhood, and with other people still viewing him as just another teenage boy growing up.

“I mean, there’s a lot to it.  There’d be a counsel of elder gods that will advise me as I develop my powers.  And I want death to be a central theme in my story.  Actually, I want death to be a character in my story that I will have to confront.  I know that probably doesn’t make sense right now, but I can explain as we get more into it.  The main thing is that this story will have a lot of different elements.  It’s going to be deep.  But I also want it to be fun.  Kind of like me.  I mean, like I said, I’d still be me in this neighborhood with the same family and friends.  So, there’s always going to be that normal stuff that I got to deal with as a kid in this neighborhood.  I’d just be A GOD at the same time!”

Nehemiah is the first to respond, “yeah, that’s pretty good.  I like that.  You can do a lot with a story like that.  Lots of action, too.”

“Romance?  What, you in love with yourself?  I didn’t hear any romance.”

“Yeah, I forgot to mention that one of the fellow gods I encounter later in this story is a young woman that I happen to fall in love with.”

Nehemiah shakes his head, “Of course.  And she probably looks like Rihanna.”

Andre lights up, “Now that’s not bad!  Maybe I should introduce her at the beginning of my story!”

Further chatter continues among the youth when I notice Russell again in the back of the room.

“Russell, it looked like you might have had an idea too before Andre shared with us his idea.”

Russell responds “So, I do have an idea – it’s a little different than Andre’s.”

I nod my head to him as a cue to proceed.  He does, even if reluctantly.

“It’s based on imagination actually.  I mean, with the drama around here, sometimes you just need to use your imagination to escape it all.  And that’s kind of what my idea is based on. So it’s a story about me and my cousin, and how we use our imaginations to create a world beyond our lives in this neighborhood.”

I’m immediately intrigued by everything Russell is saying, and I observe that the other kids seem to also be intrigued.  But just as quickly I realize that somehow time is up on the hour.

“So Russell, I definitely want to hear all about your comic idea, so maybe you and I can talk at some point separately and you can give me the full low down on your  story?”

“Yep, that works.  Even though it’s kind of simple story, there’s still a lot to it.  I can explain it all when we talk.”

Made Collaborative is Born

With that, I wrap things up with the youth.  They gather their bags and other belongings and make their way out on their treks home within the neighborhood.

And it was at that time, after the kids left the room and I was going through my project notes, I thought to myself for perhaps the first time since stepping off that bus nearly a year before: maybe, just maybe, we might actually have something here.   Something that could bring real value to the participating youth and artists alike, just as we had set out when we first started this modest project we were calling Made Collaborative.

Written by Jimmy Briseno / All illustrations by John Golden.