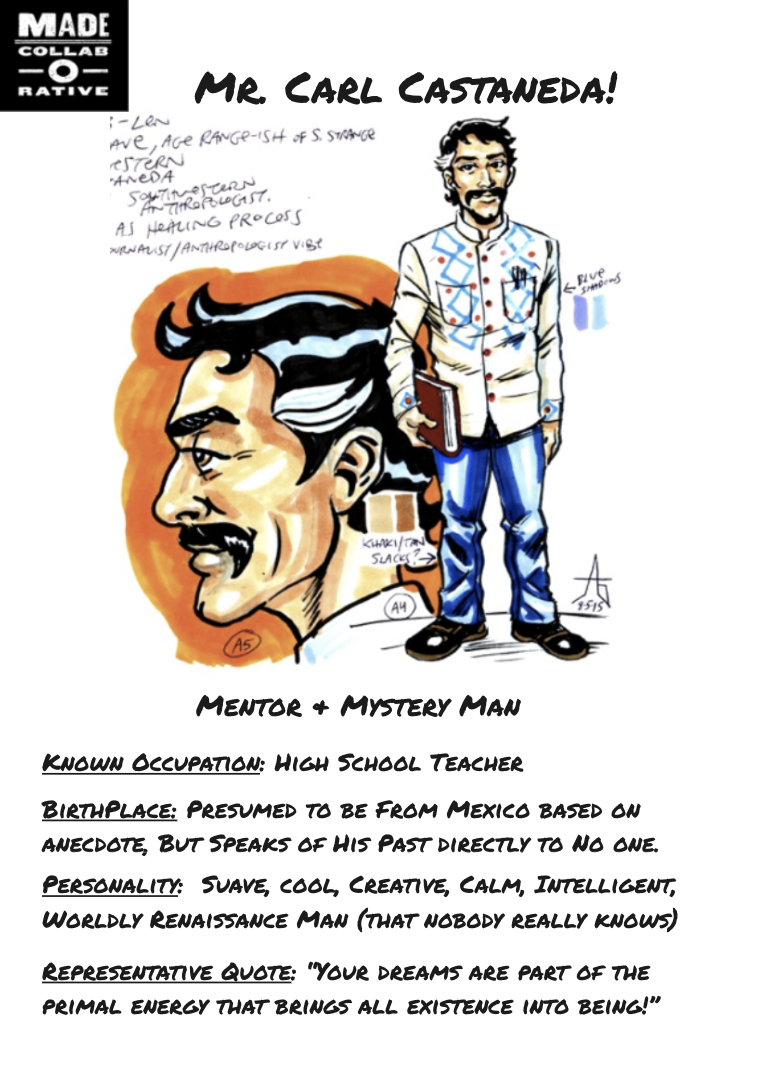 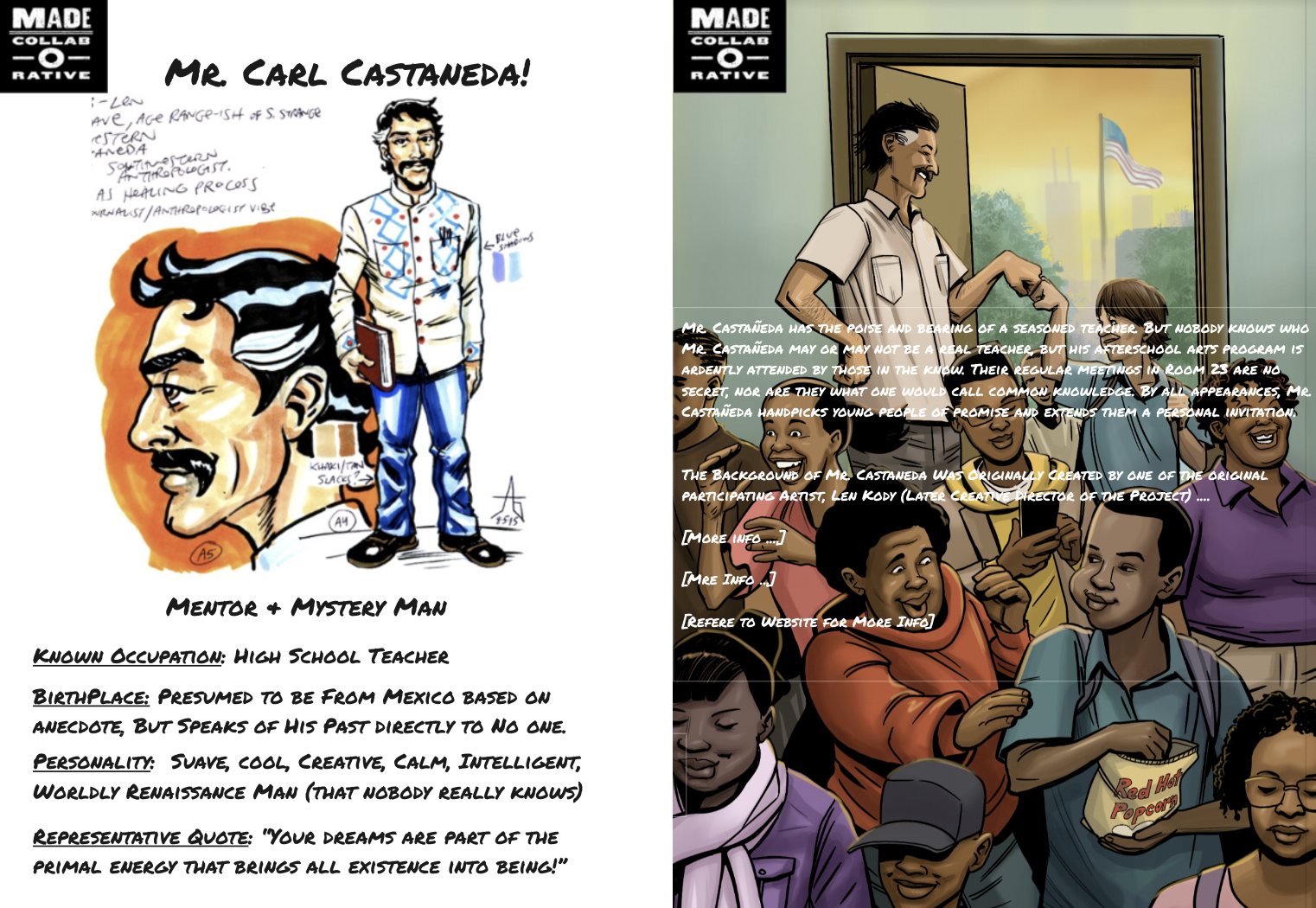 Who is Mr. Castañeda?

An urban public high school is like a village unto itself. It has all the size and social intricacies of a small town. New City High is attended by some 1,800 students and faculty each day; every year that population changes as kids grow up and teachers grow old. Nobody knows everybody. But everybody knows somebody.

So who, then, is the lean, energetic instructor in the Southwestern-style garb bounding about the hallways?

Did he just appear out of thin air?

Mr. Castañeda has the poise and bearing of a seasoned teacher. But nobody knows who he is. Mr. Castañeda may or may not be a real teacher, but his afterschool arts program is ardently attended by those in the know. Their regular meetings in Room 23 are no secret, nor are they what one would call common knowledge. By all appearances, Mr. Castañeda handpicks young people of promise and extends them a personal invitation.

His recruitment efforts have been fruitful. Tamia and Russell are both already in the program. Andre was recently invited.

Mr. Castañeda knows more than what he is saying. Which is a little staggering, when you think about it, because he says an awful lot. He speaks to his students as a shaman would to his apprentices, seeming to prepare them for some future challenge. He encourages them to see the intrinsic power within themselves.

“Calm yourself,” he says to two fighting students, “Your anger is your weakness.”

In his classroom lecture, Mr. Castañeda alludes to celebrated comic book scholar Scott McCloud and his theory of art: “It is a happy fact of human existence that we simply can’t spend every waking hour eating and having sex!”

Art, Castañeda explains, is an elevated, almost sacred human activity, because it is not motivated by life’s two most compelling instincts—survival and reproduction. McCloud puts the whole artistic enterprise of our civilization into perspective, observing that art is what we expressive apes will inevitably do “when we just don’t have a thing to do!” 1

Be that as it may, McCloud only leaves us with a pithy definition of art. As for its purpose? Mr. Castañeda has some thoughts to share on that, as well.

“Your dreams are part of the primal energy that brings all existence into being!”

Rendezvous With the Secret Chiefs

The full catalog of Castañeda’s strange journeys shall remain mostly mysterious, for now. But the initiated among us may be granted a glimpse of his humble origins. Our story begins in (where else?) Chicago. The year is 1968.

Carl Castañeda is an unmotivated, uninspired commercial artist who is experiencing a quarter-life crisis. He is an assembly-line creator of comic books, cartoon drawings and children’s advertising content. He was initially drawn to the work because of his innocent soul and his talent for illustration. But the real work of the job has turned out to be as cold and mechanical as any in Corporate America.

He and his ink-stained ilk are looked at as little more than tradesmen. Carl has grander artistic ambitions. He keeps his most personal musings in an illuminated log, his crimson composition book, the scarlet sketch-dairy he refers to as the “Red Book.”

It is within the weathered pages of his Red Book, whilst deep in aesthetic meditation, that Castañeda decides to leave the Windy City behind in search of adventure!

Castañeda rides the rails to southern latitudes. He records his rambling route within the Red Book. His pilgrimage, apparently, is driven by little more than intuition. Something is calling him to the great pyramid at Teotihuacan. Some grand epiphany awaits him there.

Carl doesn’t know exactly what he’s looking for. But he is eager, almost impatient to find out.

When his wanderings eventually bring him to the threshold of his objective, Carl is greeted with unexpected warmth by a wise old stranger. He is Sancho Panza, a farmer in the rural hamlets outside of Mexico City. He had been expecting Castañeda’s visit, evidently, because he has a small feast prepared for the weary traveler.

As they sip wine under the moon, Sancho determines exactly what it is that has brought Castañeda all these many miles. Better yet, he offers to help.

The next day, Sancho Panza begins his a harried attempt to prepare Carl Castañeda for an ineffable encounter with the Secret Chiefs.

Carl Castañeda is an ambitious aspirant. He meditates daily at the foot of the great pyramid. He refuses to leave until one of these so-called “Secret Chiefs” shows themselves!

After five days, the appearance of a familiar translucent staircase heralds the thunderous arrival of Castañeda’s cosmic appointment. Carl is pulled through a door to some higher, unfathomable dimension.

This might be more than our friend Carl bargained for.

He is quickly overwhelmed by the ornate immensity of what his inferior senses are able to relate to him. The Secret Chief manifests to Castañeda with such baroque intensity that he is devastated.

Carl is swatted like a fly from the gates of heaven.

The End of the Beginning

As his consciousness comes crashing back to Earth, Carl knows that he has paid the price for his impudence. In these first few steps of the many long voyages which will eventually lead Castañeda back home to Chicago (and to the hallways of New City High) the young man still has a lot to learn.

An Affection for Andre

So, now we see that whomever Mr. Castañeda is, and whatever his motives may be, he is drawn to our young protagonists (and to Andre, in particular) because they are on the same journey.

Like Andre, Mr. Castañeda was also beckoned to ascend the enigmatic translucent staircase. And, though the quality of their individual encounters is somewhat different, Castañeda is clearly in command of some otherworldly energies as a result of his meeting with the Secret Chiefs. He can sense things. And he appears to age very slowly.

To what extent will this mysterious mentor hinder or help our young heroes? Only time (time as we know it, at least) will tell.

All Page Illustrations by the Inimitable Andrew Dimitt