Comic Update: Russell & Draymond Wallace – “Back of the Yards” Character (Our Day Dreamers) 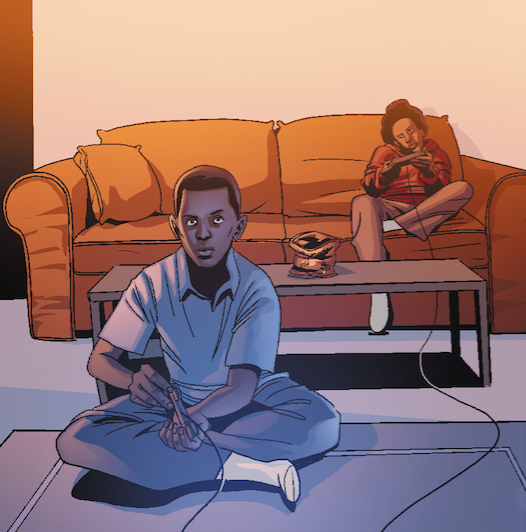 Russell and Draymond: Closer Than Brothers

A Shared Sense of Story

There’s a magical time in a young person’s life, before the opposite sex becomes quite so interesting, when the diaphanous membrane between dreams and reality is at its most permeable. It’s a time when dreams can be shared easily between those with whom we’ve forged a special, life-long bond.

Russel and Draymond are cousins—but more like brothers, really—and they share a common dream iconography made up of interwoven archetypes and meta-narratives. Together, they intermittently inhabit a whole universe of stories that are both created and experienced by the two.

They participate avidly in video games, but their imagination is ultimately too big for the platform. Russell and Draymond collaborate in fully imaginative, visionary campaigns, more akin to the tabletop D&D adventures of a generation before.

Their inner landscape is deep and vivid. Russell and Draymond express themselves through their imaginary ninja avatars, Teshue and Shiro, respectively.

Russell and Draymond’s connection to the power of dreaming is strong. Perhaps it is their youthful innocence which grants them ease of access. Of all our Back of the Yards cast, so far, they are the most easily transported to the surreal depths of imaginative fantasy.

Like Andre, whose awareness is unlocked by his encounter with one of the strange Secret Chiefs, the younger pair’s ninja visions have a continuity with the waking world—broomsticks become katana swords and a band of bullies is a marauding and villainous horde. But, Andre becomes lucid as he evolves; he begins to show signs of godlike control over the dreamscape. Russell and Draymond, on the other hand, are all but completely swept away in their recurring reveries.

Draymond, in fact—the younger and more impetuous of the pair—completely forgets himself.

“I am Shiro,” the mistaken middle schooler repeatedly insists.

But the two young boys do possess some imaginative insight. Russell especially. Russell and Draymond are the first to discover the interconnectedness of the grander dream universe, even if they aren’t quite aware of it yet. Because their dreams aren’t only shared between the pair of them. Their dreams regularly include Tamia and eventually many others.

Both dreams and stories can be a community asset because they reflect the world we know but they also show us something new.

The Fairie and the War-Wolf

Russell and Draymond, as Teshue and Shiro, inhabit a world filled with more than rival bullies, they each have pet allies, as well—familiars which they summon to aid them in the heat of battle: Enyo, the loyal, horned war-wolf, and the strange and mysterious fairie. Captivating in their own right, these fantastic beings also highlight other points of interest.

There’s a developing sense of camaraderie between Tamia and Russell. It goes at least as deep as their preference for the same sweet yet cinnamon-y snack: Red Hot Popcorn. Perhaps she envies his innocence. In the world of dreams, their connection is even more curious. Russell’s ninja avatar, Teshue, has the power to summon Tamia’s nascent fairie-form!

Draymond’s wolf is more of an extension of his own contentious energies. Quite unlike Russell’s experience. Enyo the war-wolf is Shiro’s pugnacious partner. She is steadfast at his side as Shiro bravely (and sometimes recklessly) charges into battle.

How to Make Red Hot Popcorn!

– Spread 5 cups plain popcorn on a parchment-lined baking sheet. Set pan of popcorn in the oven while you make the candy glaze.

– In a separate pan, combine one cup of butter, ½ cup of corn syrup, and two cups of Red Hot cinnamon candies in over medium heat. (optional: ¼ cup of water, one tbsp. cinnamon extract, one tbsp. sugar)

– Remove from heat and stir until smooth sauce forms.

– Spread candy-coated popcorn back on the pan.

– Bake in the preheated oven until the candy coating is set. This will take about 20-40 minutes.

What Does “Enyo” Mean?

The names of characters in stories are never chosen carelessly. Characters’ names can often provide a revealing insight into a story’s narrative-DNA. Shiro’s wolf, Enyo, is an interesting case. In Greek mythology, Enyo is a goddess of war. More specifically, she is the goddess of war, destruction, conquest and bloodlust. She often accompanied the Greek pantheon’s primary war god, Ares, in his many campaigns. Certainly, in all that’s been revealed to us so far, the fighting spirit of both Shiro and his horned wolf is plainly on display. Intriguing, too, is the fact that in the mythology, Ares is represented by a horned ram.

Stories Show Us How to Think

Russell and Draymond are at first only immersed in their consuming world of fantasy. But in that bemused state, the boys’ powerful shared story grows to include many other players, even if most of them (including Russell and Draymond themselves) are hardly aware of it.

Stories reflect the everyday world, but they can also change it. One wonders where young Russell’s path, particularly, may lead him as he joins other youth in beginning to “wake up” to the transformative power of dreams.