The Comic & The Collaborations!

The Comic! – Back of the Yards 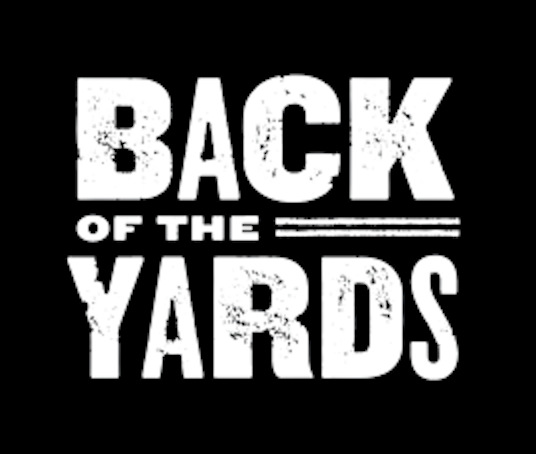 What if your dreams became real?  It doesn’t get more real than Back of the Yards, on the South Side of Chicago, when you’re growing up as a teen. It’s where fantasy and the power of story can build resilience, foster healing and lead to greater understanding.

A fictionalized version of the real Back of the Yards neighborhood serves as setting for the eponymous comic book series. Likewise, the stories and the characters themselves are based on the real lives and musings of Chicago youth. These stories were first conceived by students attending an after school arts program in the West Side of Chicago and they were collected by our project team during Made Collaborative’s first round of urban outreach to inner-city schools.  By bringing professional comics artists and writers into the creative process, we hoped to validate the kids’ stories and experiences by weaving them together as the narrative threads of a real comic book series.

The result is a collaborative effort between artists and youth. It is the stuff of Back of the Yards’ first story arc: “Just Dreamin’.” But how, exactly, do kids’ ideas become comics pages?  Well, in some ways, it all started with the comic’s first main character and the participating youth that inspired that character.

Indeed, this entire project can be primarily traced to a single, intrepid utterance by a young man whom we call “Andre.” It was a declaration that emboldened us all:  “I’ve got an idea.  I know what story I want to tell.  And it’s going to be great!”

Andre was the first character to take shape in Phase One of Made Collaborative’s youth outreach, and hence, he takes the lead role in our initial story arc. He is a curious, creative and charismatic boy who comes about his powers as a result of a mysterious encounter with a being beyond space and time.

The premise of Andre’s story is that Andre himself, as the main character, obtains “god-like” powers through a supernatural encounter in his Chicago neighborhood.  As originally described, the story begins with Andre and a friend walking to a house party of a known high school acquaintance. At the party, Andre sees some familiar faces and also some new ones. He meets Charmayne for the first time. The two banter as they get to know one another. Charmayne—one-half of a precocious pair of twins—challenges Andre’s rebellious and self-assured manner.

That is, until he hears some commotion outside. 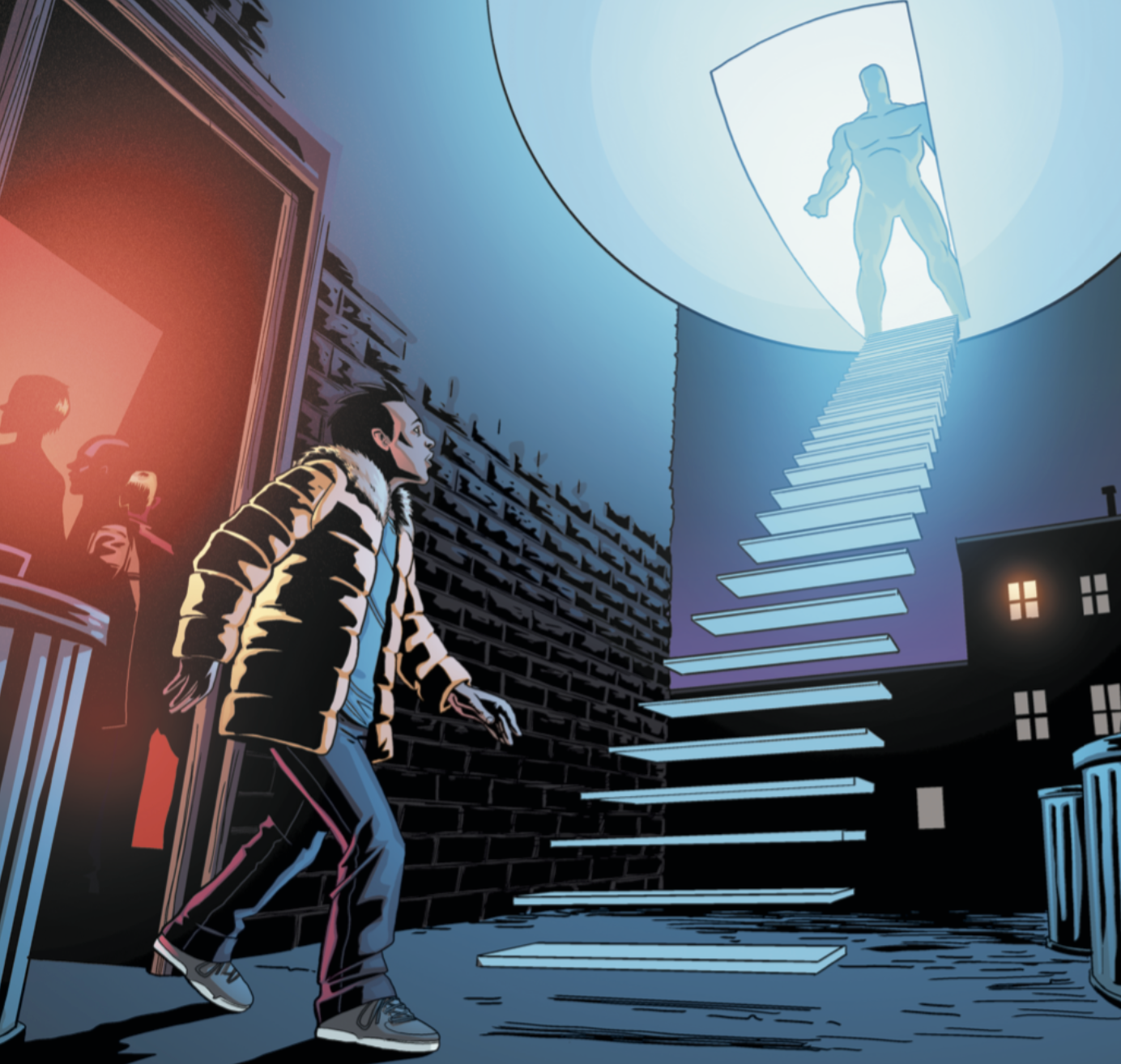 From this supernatural encounter, Andre learns that he has a certain mastery over the strange world that we all go to when we dream. But, does that mastery carry over into the waking world, too? Moreover, what would Andre do with that kind of power?  Which is a theme we will continue to explore as build upon Andre’s character and story line with future participating youth. 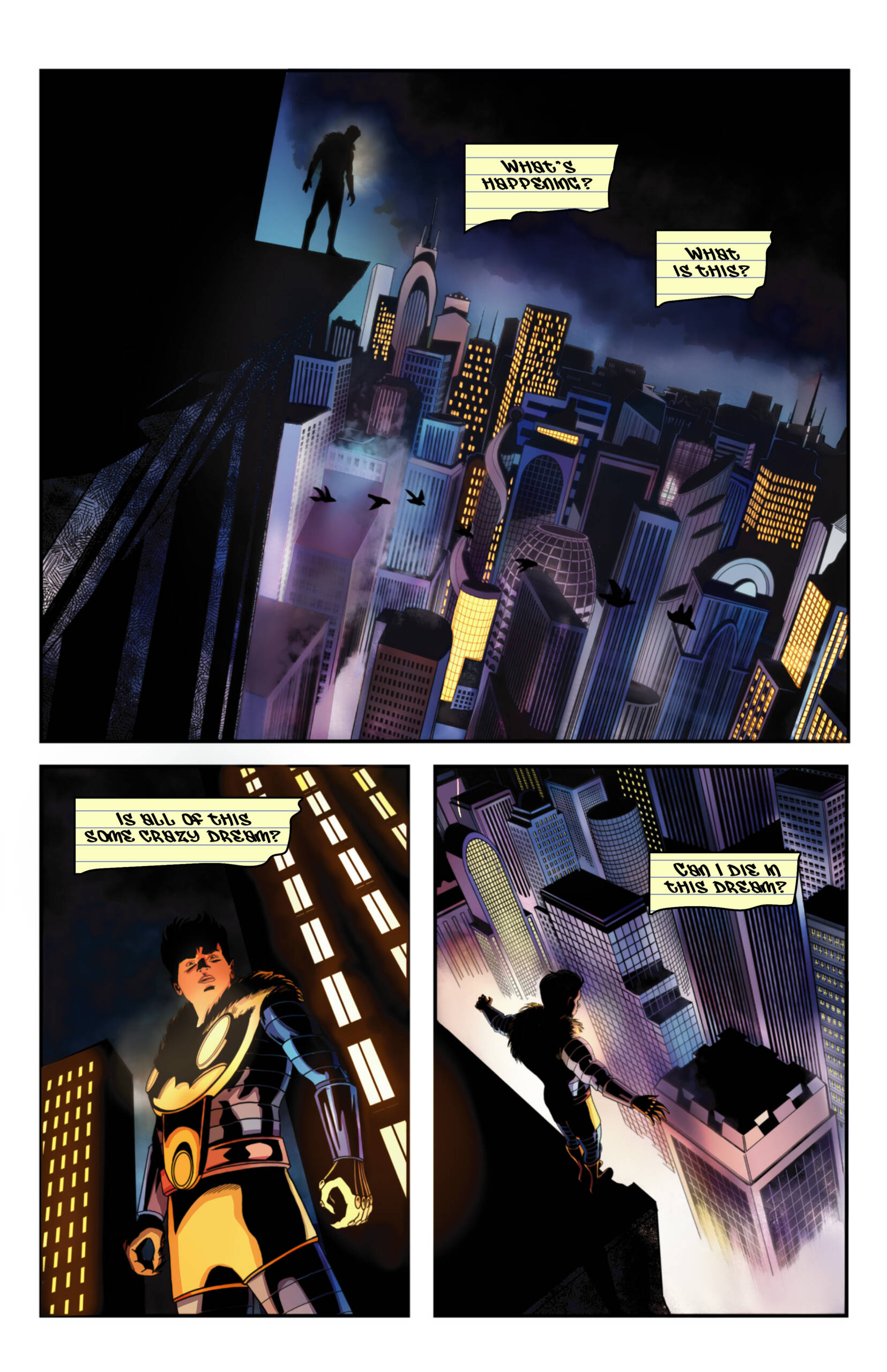 And that’s just the start of things as Andre’s story is ultimately intertwined with Tamia’s story of first love and betrayal.

The Back of the Yards comic character of Tamia Parker was also inspired from the first round of youth collaborations in the West Side of Chicago.  During those initial collaborations, Jimmy Briseno met with a number of youth who shared initial ideas for comic characters and story lines.  One of those youth was a young African American girl from that West-Side neighborhood.

The young woman’s initial question to Jimmy was whether the comic stories could be based on be based on real life, and more specifically, relationships?  When Jimmy affirmed that the characters and stories could be about whatever she wanted, she would go on to describe a recent relationship experience which was characterized by drama, deception and ultimately, heartbreak.

But as she explained her experience and her story premise, the young woman also emphasized to Jimmy that she didn’t want to tell this story to focus on a broken heart and the related drama from her relationship, but rather, she wanted to emphasize how that experience ultimately helped her grow as a person and look within herself to find her value as a woman.

And from there, the inspiration for the comic character of Tamia Parker was born, which we hope will in turn inspire many more collaborations to come. 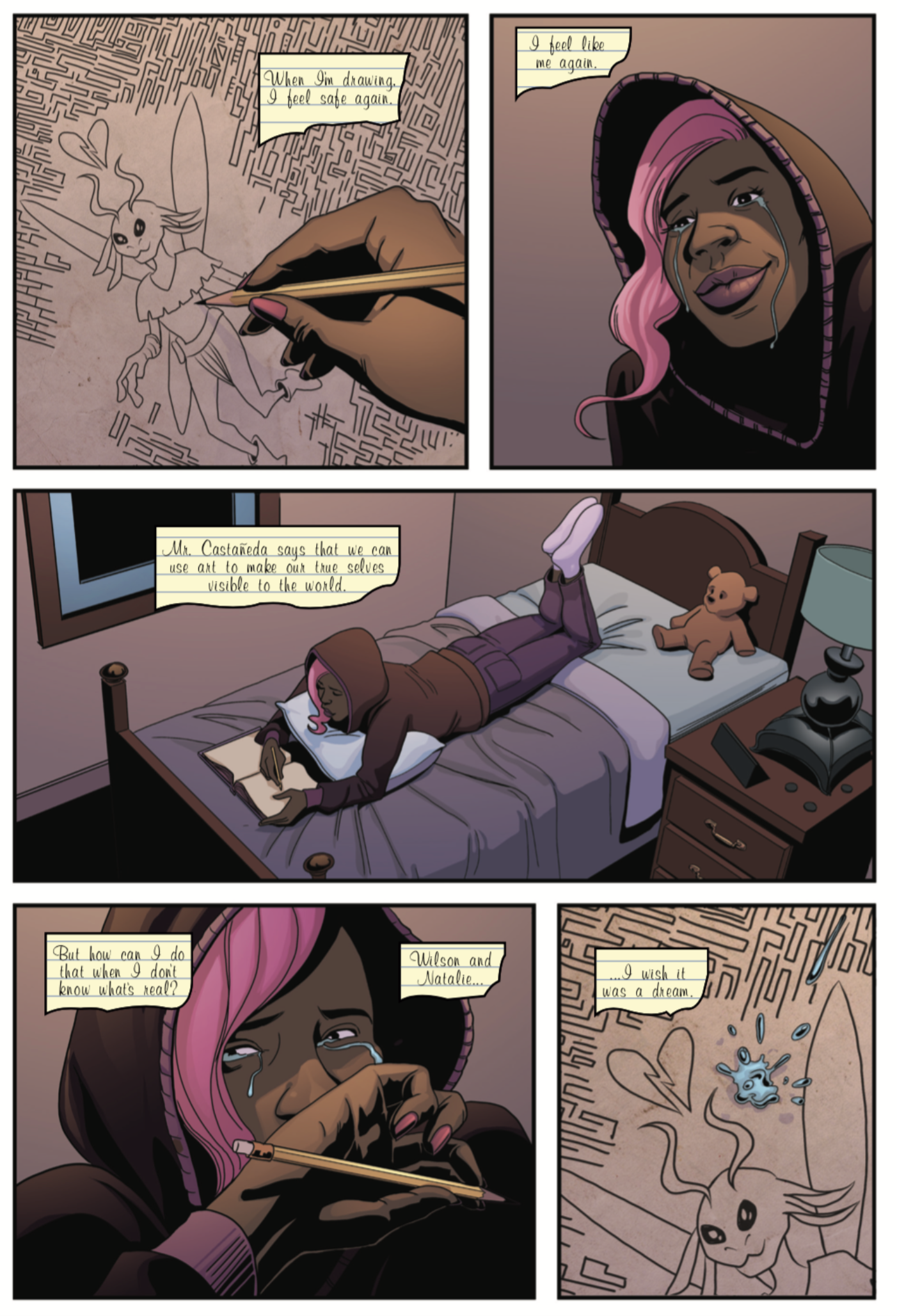 Also inspired by the first round of youth collaborations are the characters of Russell and Draymond.  Russel and Draymond are cousins—but more like brothers, really—and they share a common dream iconography made up of interwoven archetypes and meta-narratives. Together, they intermittently inhabit a whole universe of stories that are both created and experienced by the two.

They participate avidly in video games, but their imagination is ultimately too big for the platform. Russell and Draymond collaborate in fully imaginative, visionary campaigns, more akin to the tabletop D&D adventures of a generation before.

Their inner landscape is deep and vivid. Russell and Draymond express themselves through their imaginary ninja avatars, Teshue and Shiro, respectively. 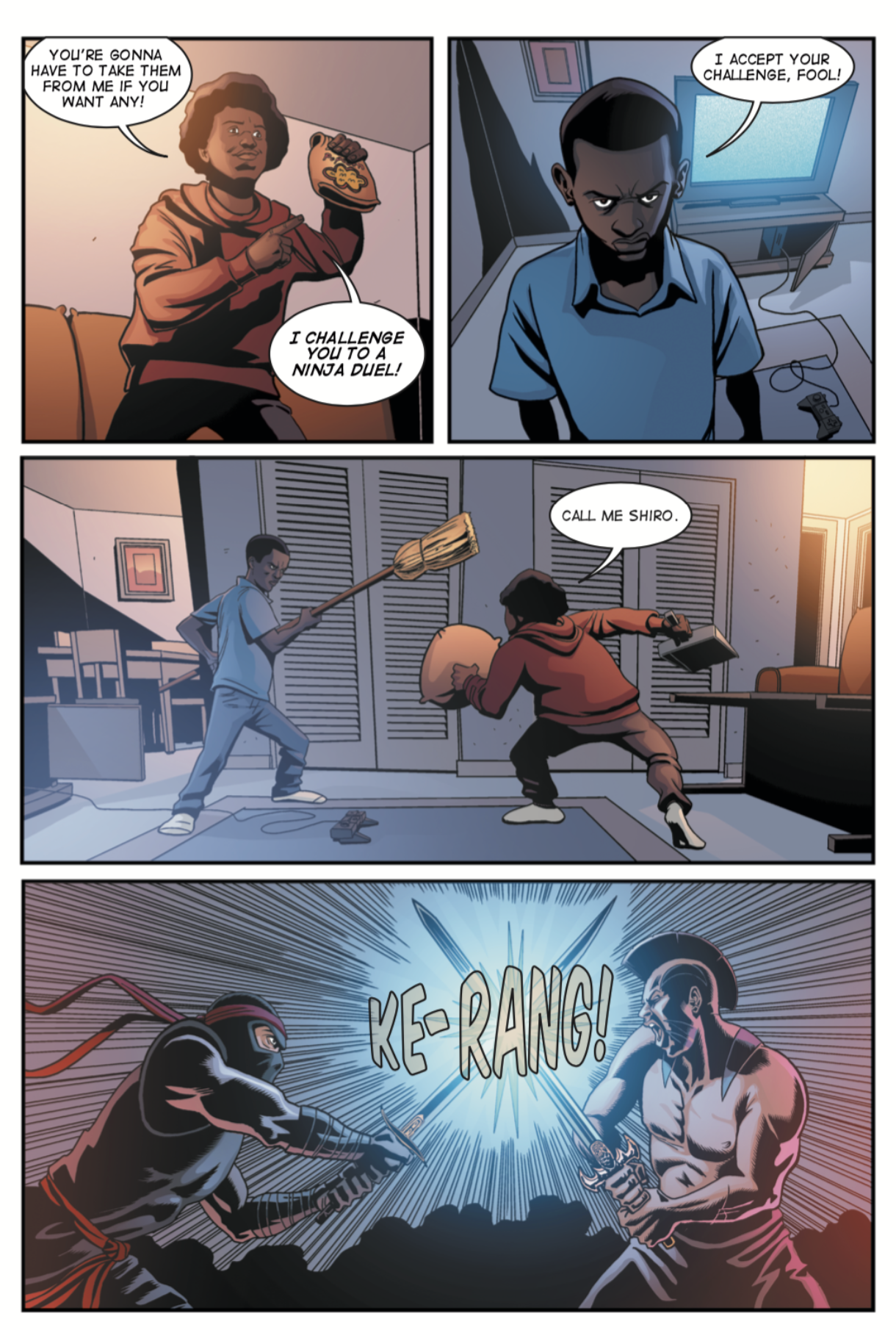 The Mysterious Lynchpin that Connects Them All, Mr. Castaneda

In order to tie all of the youth characters together as part of a common comic story narrative, Len Kody developed the character of Carl Castaneda.

Mr. Castaneda, that is. 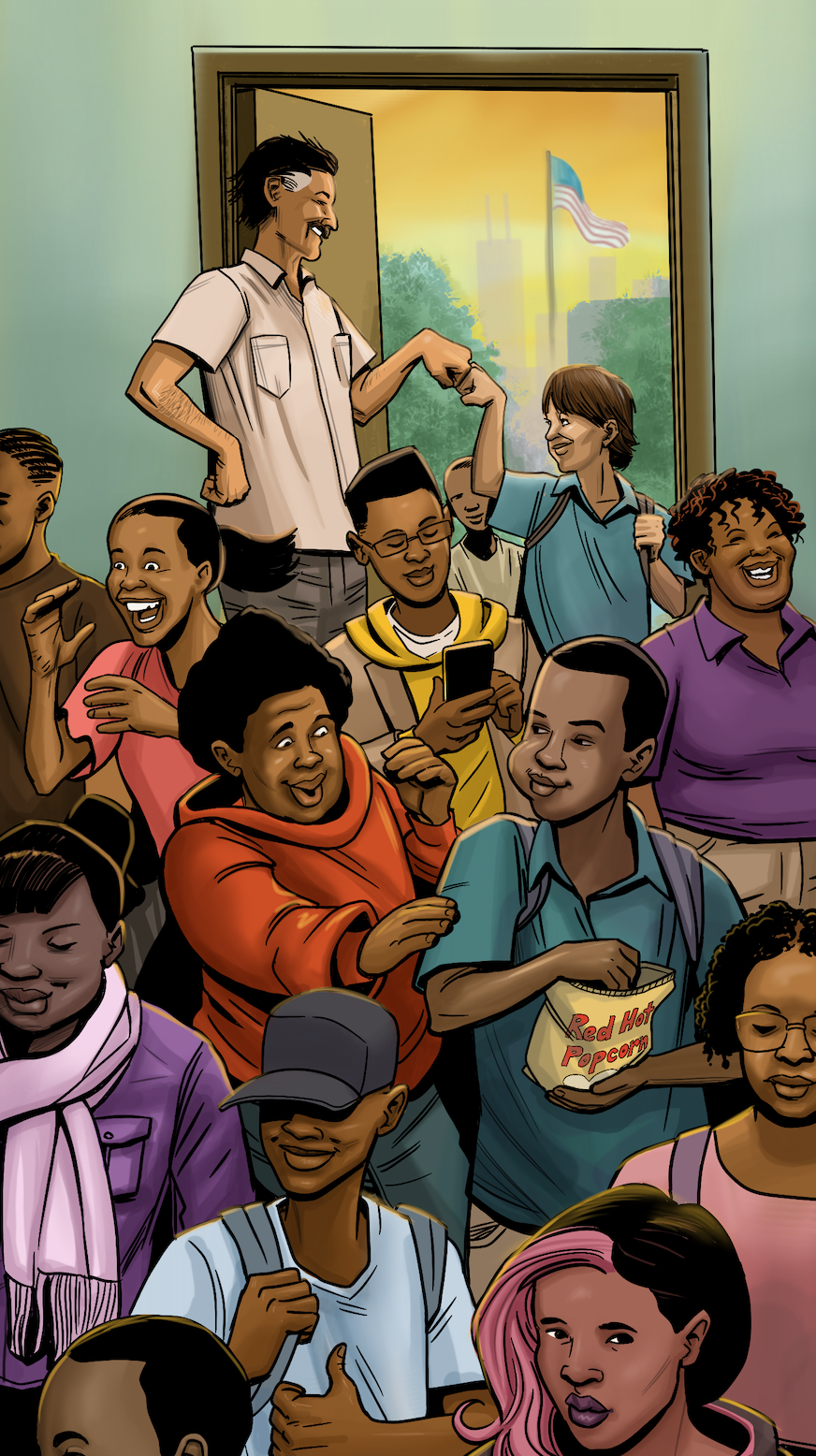 Mr. Castañeda has the poise and bearing of a seasoned teacher. But nobody knows who he is. Mr. Castañeda may or may not be a real teacher, but his afterschool arts program is ardently attended by those in the know. Their regular meetings in Room 23 are no secret, nor are they what one would call common knowledge. By all appearances, Mr. Castañeda handpicks young people of promise and extends them a personal invitation.

His recruitment efforts have been fruitful. Tamia and Russell are both already in the program. Andre was recently invited.  And from there, a special bond between Andre and Mr. Castaneda begins formation from which we will build through future collaborations with participating youth. 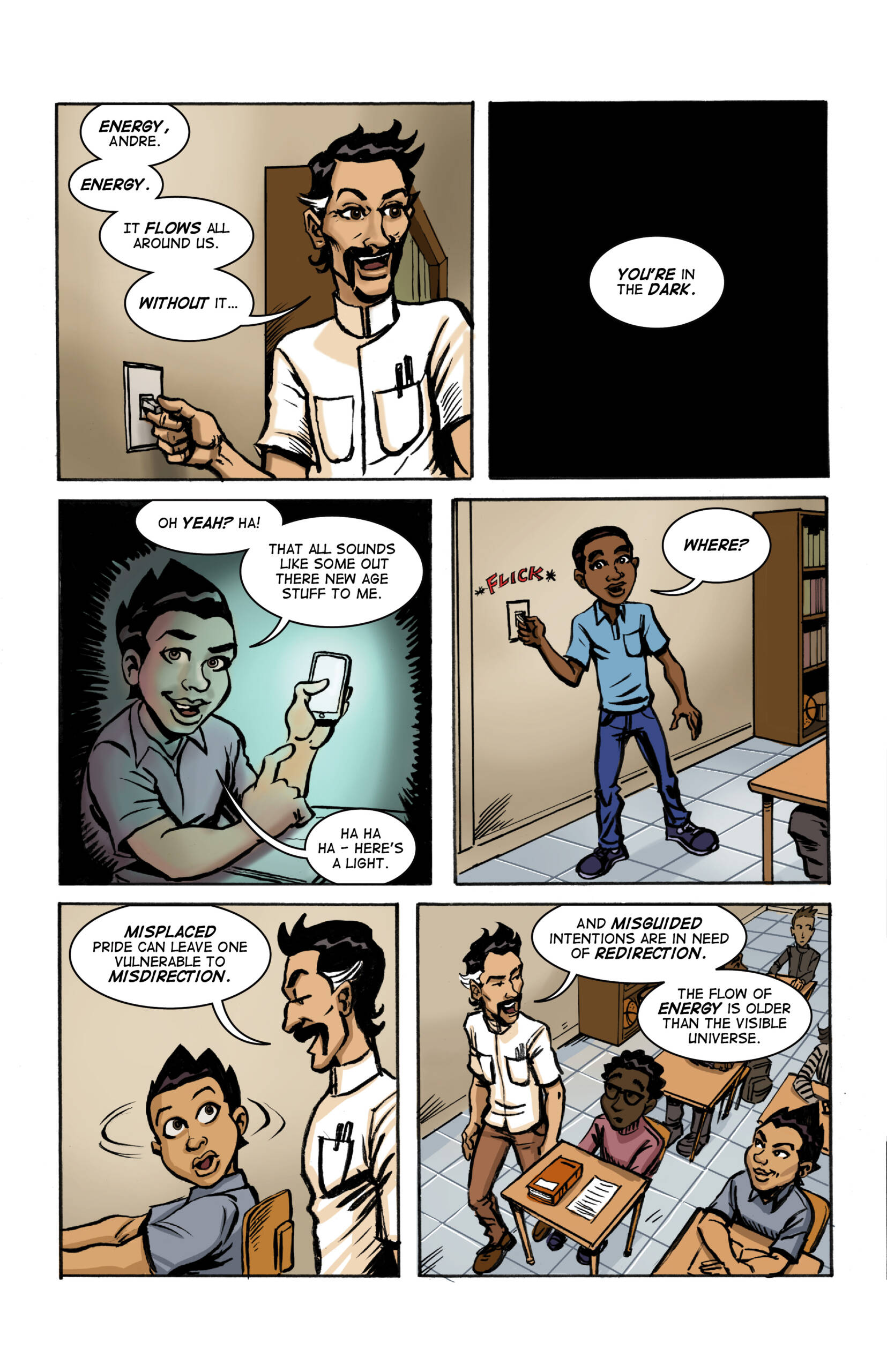 Bedrocks of the Neighborhood – The Elders

And last but certainly not least, central to the Back of the Yards comic narrative are the Elders.  Created by Jimmy Briseno and Len Kody to help provide further context for both the fictional Back of the Yards fictional neighborhood and the younger comic characters, the Elders are three wise-cracking wise guys man a permanent post around a pickle barrel in front of Kozlow’s General Store.

They are Peaches, Dex and Big Earl. Although these distinguished gentlemen of the neighborhood are officially retired from whatever eclectic ventures kept them occupied (and mostly out of trouble) in their storied youth, the Elders, as we call them, continue to serve an important purpose in their community—and in our story!

The intertwining threads of fate, Back of the Yards, all intersect at the Elders’ humble pickle barrel, believe it or not. In ancient mythology, the Fates weren’t just observers and commentators but also tailors in life’s grand pageantry. Similarly, Peaches, Dex and Earl color the happenings of their Southside Chicago block with their piercing insight and cutting humor. They provide context, gravitas and perspective, reminding the reader and our younger characters that the world is big and history is long. 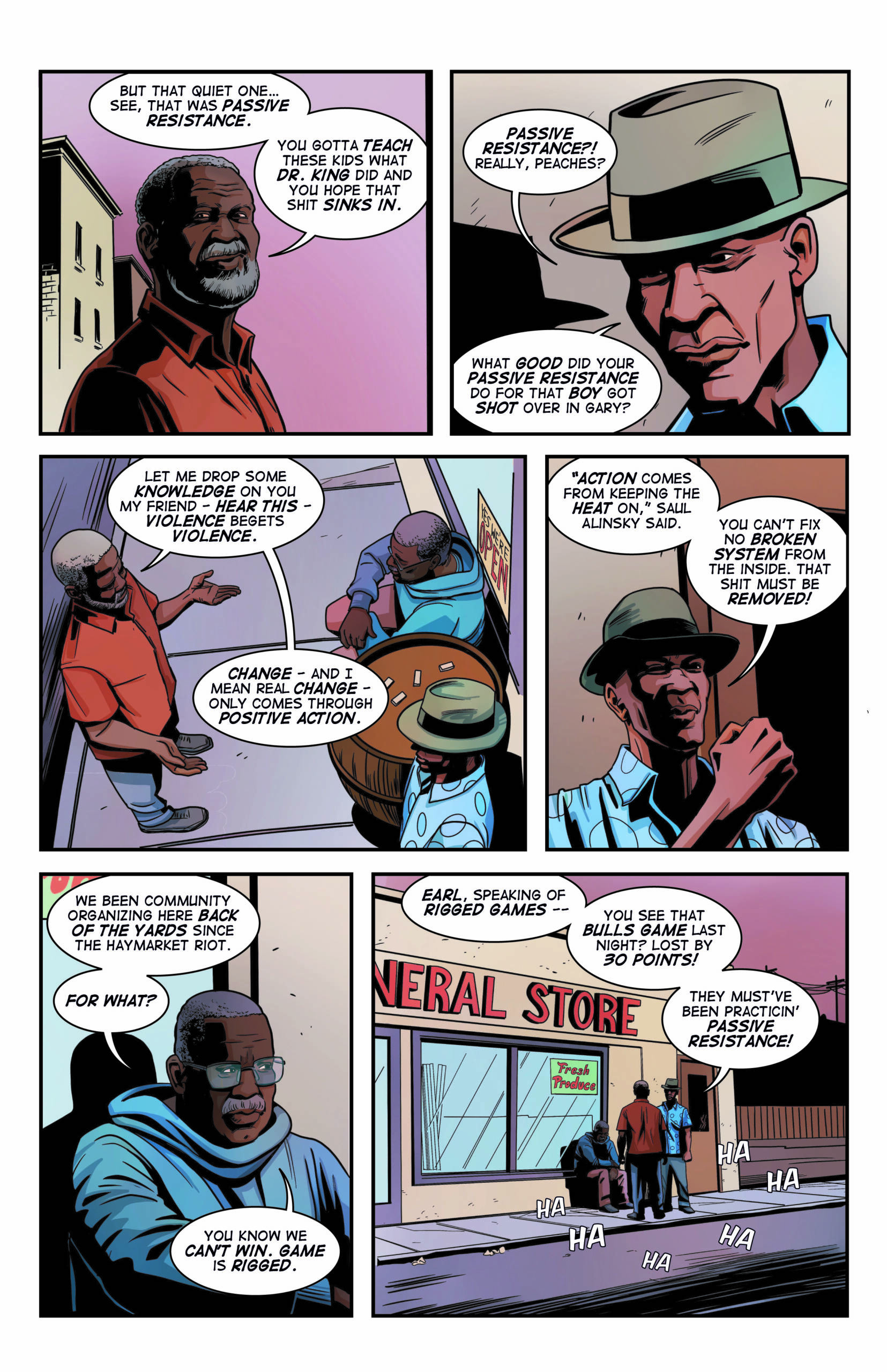 Many of our initial participating youth had similarly intricate imaginary worlds, worlds they would create with others.  And we anticipate incorporating creative ideas and input of many more future participating youth within the Back of the Yards comic series through the collaborations described below.  Made Collaborative has provided a structured outlet for these stories and we’ve developed them into real comic books with the help of professional artists and writers.  You can learn more about all of these characters, as well as the corresponding comic collaborations on this website or better yet, you can just Get the Comic here!

We will be using the Back of the Yards comic series (and any future comic series) as the basis for most of our collaborations. With each new upcoming comic issue of Back of the Yards, we will identify a few topics and/or themes that will be focal points for the next issue’s story line (think of this as the internal pre-production process for each upcoming issue).

From these selected themes and topics, we will then identify specific collaboration opportunities (in the form of ongoing “collaborative series”) for participating youth, artists and other collaborators to develop new comic material that will either be incorporated directly into the production of the new Back of the Yards comic issue, either as part of the ongoing Back of the Yards comic narrative or as an independent feature – or may even potentially lead to the creation of new comic series down the road!