Character Card #5: Introducing The Elders – “Back of the Yards” Characters (The Wise Men) 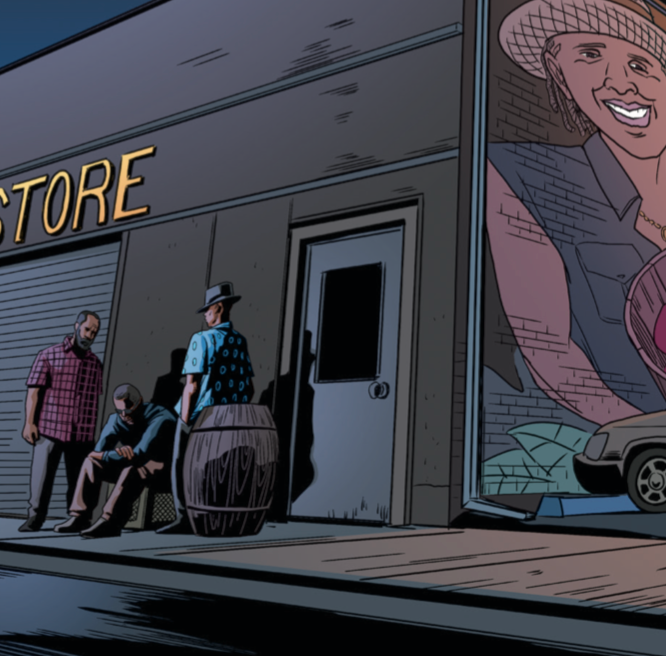 The Funky Finger of Fate

Three wise-cracking wise guys man a permanent post around a pickle barrel in front of Kozlow’s General Store. They are Peaches, Dex and Big Earl. Although these distinguished gentlemen of the neighborhood are officially retired from whatever eclectic ventures kept them occupied (and mostly out of trouble) in their storied youth, the Elders, as we call them, continue to serve an important purpose in their community—and in our story!

The intertwining threads of fate, Back of the Yards, all intersect at the Elders’ humble pickle barrel, believe it or not. In ancient mythology, the Fates weren’t just observers and commentators but also tailors in life’s grand pageantry. Similarly, Peaches, Dex and Earl color the happenings of their Southside Chicago block with their piercing insight and cutting humor. They provide context, gravitas and perspective, reminding the reader and our younger characters that the world is big and history is long.

Today’s generation is just the latest edition of an ongoing epic called life. And, when you’ve been around as long as these three, you come to expect (if not appreciate) all of its recurring motifs.

Peaches is a sweet old-timer, but not without substance. He is a source of both warmth and reason in the group, initiating many of their deeper conversations and keeping his comrades in check when he needs to. 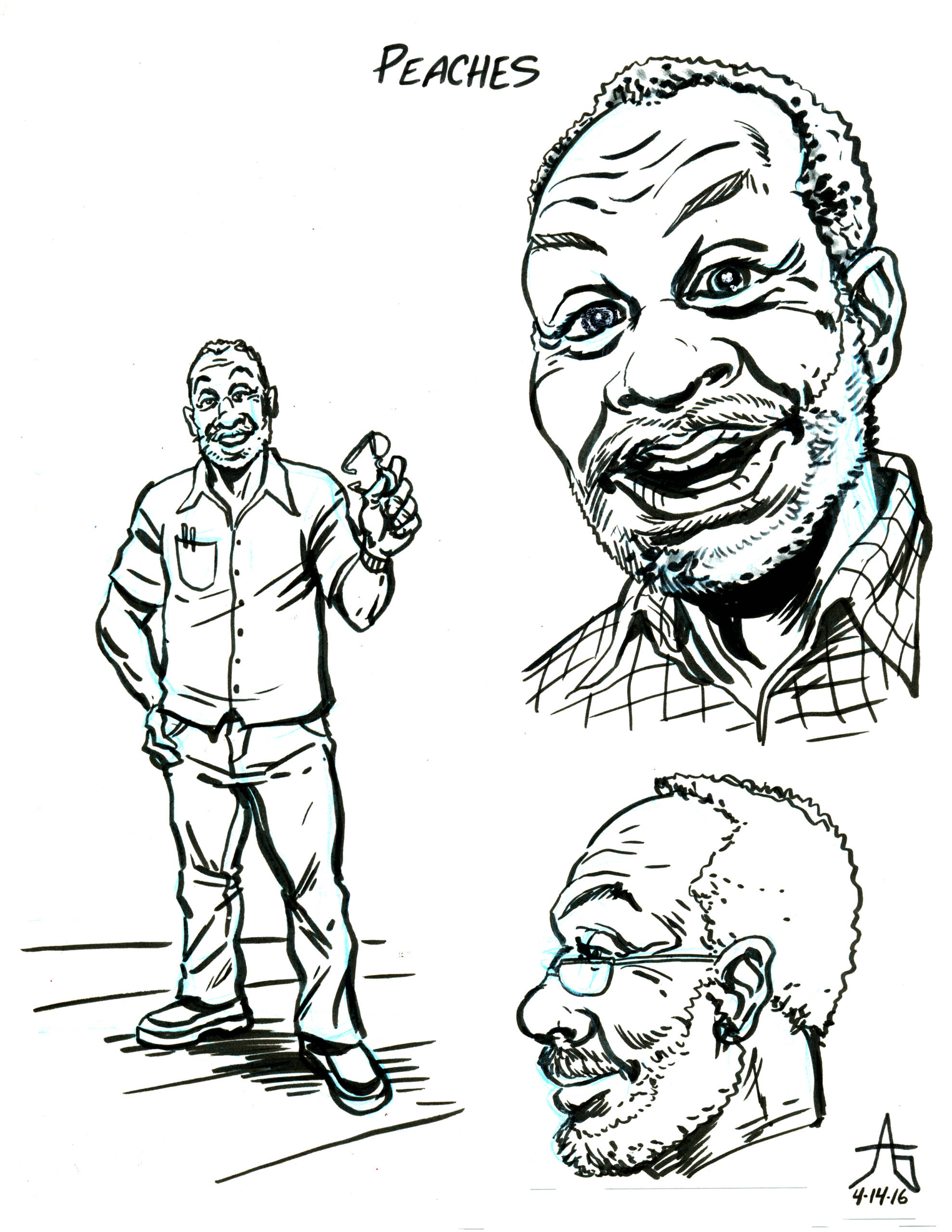 As with all the Elders, his full backstory is too rich and mysterious to reveal entirely just yet. But it’s plain to see that Peaches carries himself with an unmistakable air of dignity. He expresses himself thoughtfully. Though rational, he is certainly not immune to passion, especially in matters regarding injustice.

Peaches comes from a background in activism. Like many of his generation, his Southern Baptist roots are entangled with actions of Rosa Parks, Martin Luthor King and the Southern Christian Leadership Conference (SCLC).

He may have laid down his sword in age, but the years haven’t silenced his spirit. Peaches aims to teach the youth, Back of the Yards, so that they may continue the crusade.

Dex has a sharp mind. As steel sharpens steel, he keeps his mind sharp through constant use: chess in the park, all-night poker games and the occasional hustle. They say you can’t teach an old dog new tricks, but that isn’t true of Dex—he’s probably the only one of the Elders who knows how to work a smartphone! Even so, he’s never learned his lesson. Dex has lost a step or two but he stays one step ahead of the law, for now. 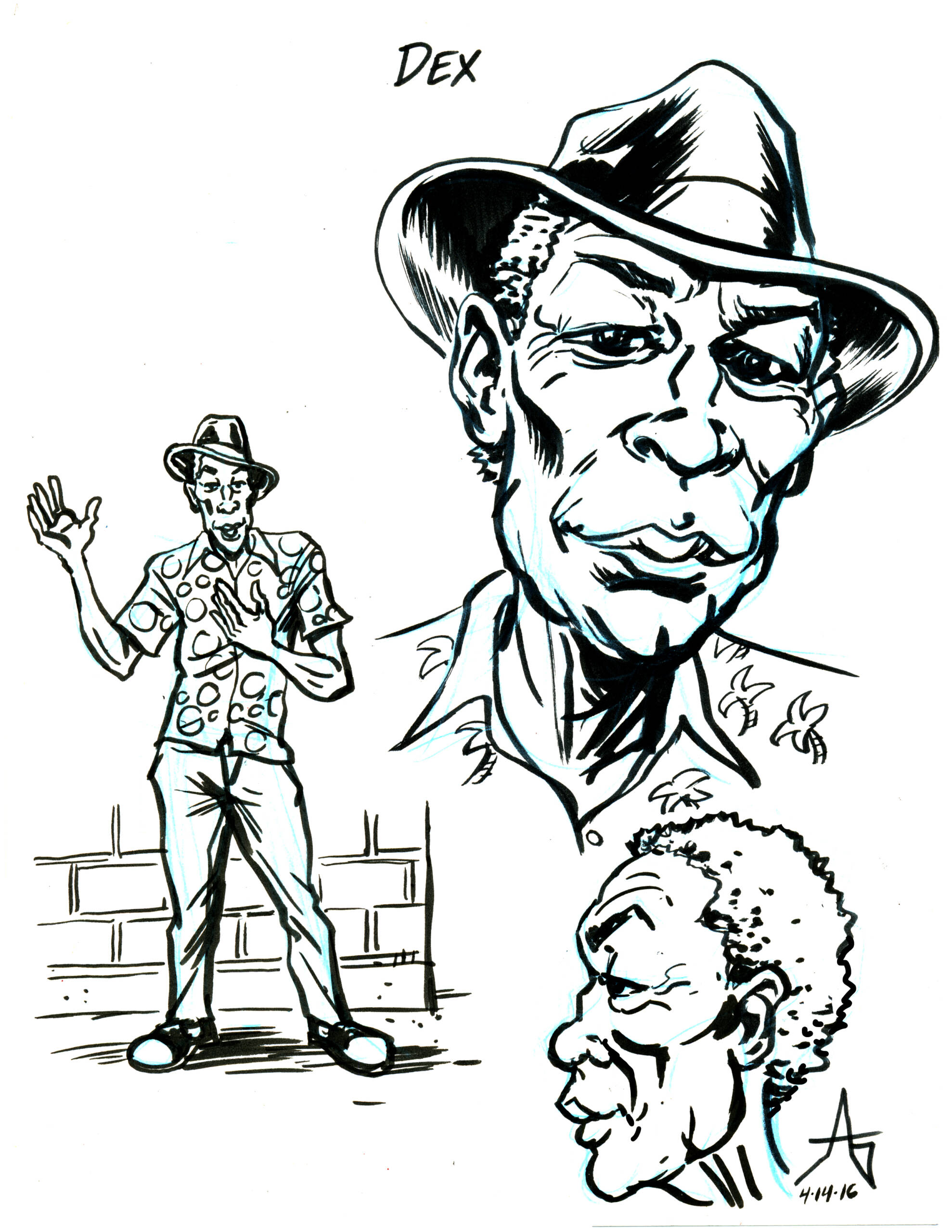 Unlike Peaches, who became a community leader at marches and church picnics, Dex made his way running numbers for the policy kings of Chicago. “Policy” was an underground lottery in poor and working-class neighborhoods that was something of an illegitimate institution. The whole racket was run by the mob but supported by local politicians and preachers who always counted on their cut.

Dex is a good man, at heart. He’s never hurt anyone (intentionally) nor has he scammed anyone who didn’t have it coming (mostly). He’s just not one to turn the other cheek. Dex is an operator. When he sees injustice, he’s going to figure out a way to finish ahead.

Big Earl is a big man with a big heart. Beloved by all in the neighborhood, everybody knows his name and has heard a story or two about this gentle giant. Grounded in reality and blessed with a native mental acuity, Earl just may be the wisest of the bunch. 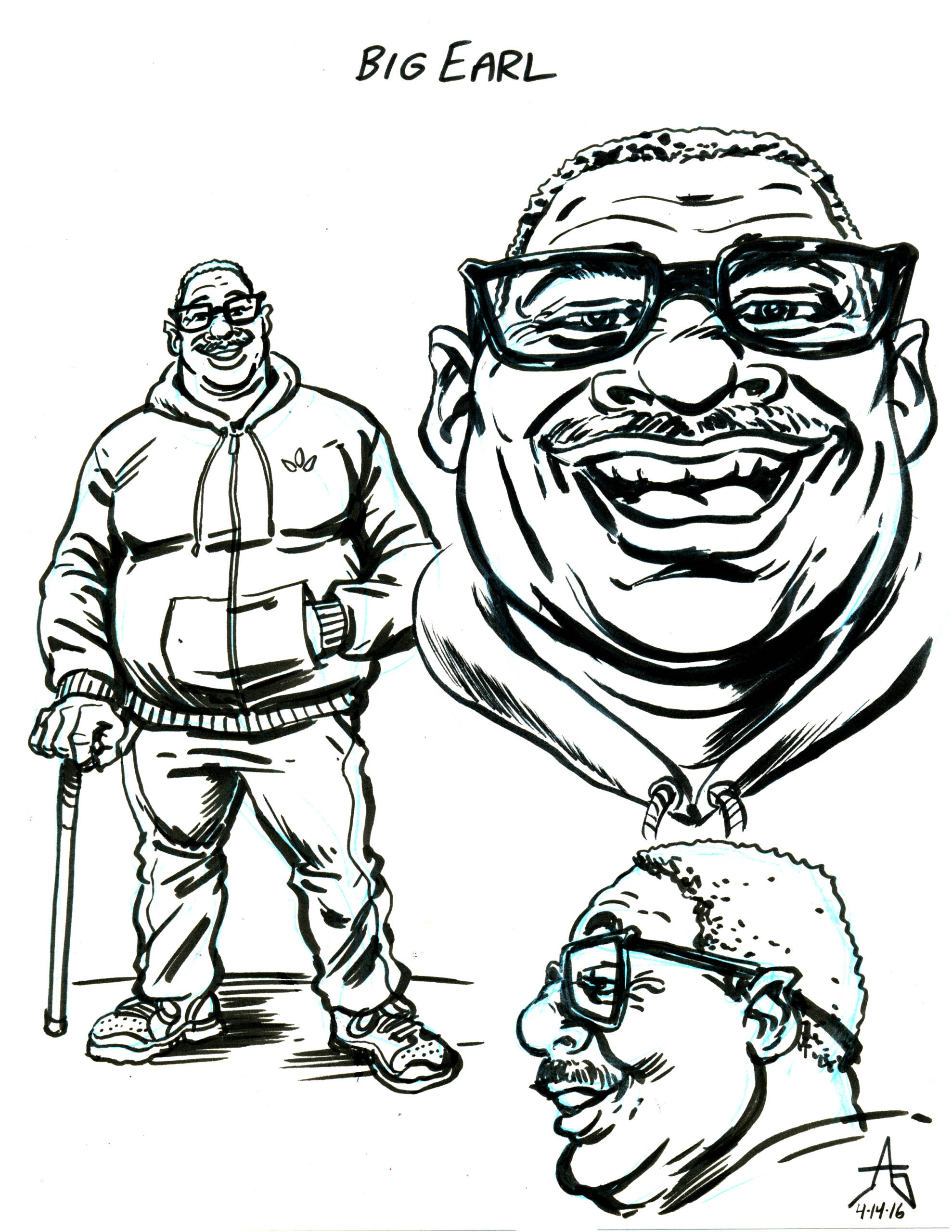 Before he packed on the pounds, Earl was towering 6’5” of solid muscle. He matured early, physically. But his otherwise astute brain is burdened by a severe case of dyslexia, which meant he would always struggle in his studies. So, his sure path to preferred pursuits in medicine or engineering ran headlong into the low expectations folks tend to have for a big lug who was born and raised Back of the Yards. His dyslexia remains undiagnosed to this day.

Because of his large size and kind nature, Earl stood up to the local bullies. So, the other kids all pitched in to help him pass his classes. Thanks to their help, he remained eligible to play high school football.

On the field, Earl was a champion.  His physical feats still the stuff of regional folklore.

As an adult, Earl avoided the temptation to become muscle for the various Chicago criminal outfits, despite their persistent recruiting efforts. Earl is essentially a protector, not a predator. He tried to become a cop or a firefighter, but his reading and writing difficulties held him back once again. He couldn’t pass the entrance exams.

Earl settled for a career in security, a position in which he excelled, until that fateful night…

Following his injury, Earl’s once-unstoppable metabolism slowed down. It became difficult for him to fight his weight. So, his old high school nickname, “Big Earl,” took on new meaning.

Recovery was difficult for Earl, but he’s not bitter. His peace doesn’t come from ignorance or blind optimism but from deep understanding:

“If I never got hurt, I might never have gotten to see the good side of the human spirit, like I saw from those who helped me.”

Listen to Your Elders

The broad lives of the Elders tie the threads of fate to people, places and events far beyond the scope of our story. They are a voice of wisdom and experience to our young heroes.

But just because they’re old, doesn’t mean their journey is over. What new adventures might the trio encounter in this bold new age? Keep watching Back of the Yards.