Well we are calling this project Made Collaborative.  And if you read this early blog entry, you probably already know that the project’s primary mission is to collaborate with participating urban youth to develop collaborative comics stories and other creative content based on their own interests and ideas.  And by doing so, we hope to foster creative thought and provide a truly positive collaborative experience to participating youth and artists alike.

That’s the project in a nutshell anyway.  However, this project didn’t actually start off as a comic-based project.  In fact, prior to starting this project, I don’t think I actually read a comic story from beginning to end in my entire life (and I’m certainly not proud to admit that now).

Indeed, when we started this project, it was just based on a very simple premise that perhaps something uniquely positively could potentially be generated by connecting urban youth with talented artists.  What that “something” would ultimately become was anyone’s guess at the time. The main objective at the time was to just facilitate the collaborative process and see what came out of it.

And with time, what came out of it was this comic-based project.  And as we move forward with these “This and That” blog entries, we will try to capture just how this project has evolved over time in that regard, culminating in the creation of our first comic series called “Back of the Yards” and, separately, the Made Collaborative Scholarship Fund, which will provide talented urban youth with opportunities to attend fully funded pre-collegiate educational programs of all types, fulfilling the very core of our project’s mission of urban youth empowerment.

A Little Project Video We Did Back in the Day

(opens in a new tab

The Comic! – Back of the Yards

What if your dreams became real?  It doesn’t get more real than Back of the Yards, on the South Side of Chicago, when you’re growing up as a teen. It’s where fantasy and the power of story can build resilience, foster healing and lead to greater understanding.

Based on the stories and experiences of real urban youth, Made Collaborative presents Back of the Yards, a story of gritty truth that’s beyond your wildest dreams.

Andre was the first character to take shape in Phase One of Made Collaborative’s youth outreach, and hence, he takes the lead role in our initial story arc. He is a curious, creative and charismatic boy who comes about his powers as a result of a mysterious encounter with a being beyond space and time.

Andre learns that he has a certain mastery over the strange world that we all go to when we dream. But, does that mastery carry over into the waking world, too? Moreover, what would Andre do with that kind of power?

And that’s just the start of things as Andre’s story is ultimately intertwined with Tamia’s story of first love and betrayal, as well as Russell and Draymond’s imaginary world of escape from the drama of their South Side neighborhood, the Back of the Yards.

Many of our initial participating youth had similarly intricate imaginary worlds, worlds they would create with others. Made Collaborative has provided a structured outlet for these stories and we’ve developed them into real comic books with the help of professional artists and writers.  You can learn more about all of these characters, as well as the corresponding comic collaborations here or better yet, you can just Get the Comic here! 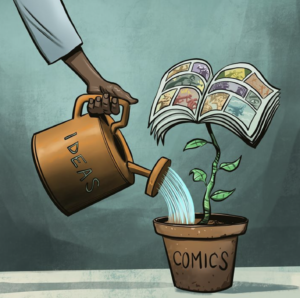 We will be using the Back of the Yards comic series (and any future comic series) as the basis for most of our collaborations. With each new upcoming comic issue of Back of the Yards, we will identify a few topics and/or themes that will be focal points for the next issue’s story line (think of this as the internal pre-production process for each upcoming issue).

From these selected themes and topics, we will then identify specific collaboration opportunities (in the form of ongoing “collaboration series”) for participating youth, artists and other collaborators to develop new comic material that will either be incorporated directly into the production of the new Back of the Yards comic issue, either as part of the ongoing Back of the Yards comic narrative or as an independent feature – or may even potentially lead to the creation of new comic series down the road!

Made Collaborative’s vision is to develop broad creative content inspired by collaborations in the pursuit of understanding, not to obtain “answers,” but rather, to help better reveal our shared humanity …

and also just have a little fun along the way.

This is a grass roots project in the truest sense.  Started with a summer spent volunteering at a local Chicago after school program and evolved into today’s current incarnation.  Just a rag tag group of artists trying to do something they thought was cool in their spare time.  And if you’d like to learn about any us, just click on any of the mugs below.